Using Excel’s formula for matrix multiplication (MMULT) is not as straight-forward as using the other built-in formulas provided by Excel. By simply following the MMULT formula wizard, you will get a head-scratching result if you are not aware of the two additional steps necessary in using this formula (or any Excel formula that uses an array as input, such as TRANSPOSE).

Before beginning, we’ll do a quick review of matrices. A matrix is an m x n array of real or complex numbers, where m is the number of rows and n is the number of columns. The matrix is square if m = n and rectangular otherwise. A vector is a matrix of one row or column: a m x 1 matrix is a column vector and a 1 x n matrix is a row vector.1

END_OF_DOCUMENT_TOKEN_TO_BE_REPLACED

Yesterday, I reviewed The Music of the Primes: Searching to Solve the Greatest Mystery in Mathematics, a book by Marcus du Sautoy.

In the book, du Sautoy explains the Sieve of Eratosthenes, an algorithm for finding all the prime numbers under a given limit.  The concept is surprisingly simple – for a set of numbers less than N, begin with the first prime number (2) and throw out all of its multiples (4, 6, 8, etc) up to N.  Then start over with the next number remaining (3) and throw out all of its multiples up to N.  Some multiples of 3, such as 6 and 12, will have been thrown out in the prior step.  Keep repeating the process until there are no numbers less than N left to be thrown out.

END_OF_DOCUMENT_TOKEN_TO_BE_REPLACED

I just finished reading Marcus du Sautoy’s “The Music of the Primes: Searching To Solve the 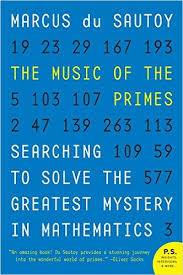 Greatest Mystery in Mathematics”.  If a book about a subject as dense as the Riemann Hypothesis can be described as a page-turner, this is the one.  Using analogies and metaphors, du Sautoy enables the reader to appreciate the difficulties, as well as the successes, mathematicians have experienced in trying to prove a conjecture that has defied proof for almost 200 years.  The book’s audience is the lay reader and thus, does not delve too deeply into zeta functions, imaginary numbers and quantum chaos theory.  In other words, after reading, you still won’t be equipped to find a proof of the Hypothesis and claim the $1 million Clay Millennium Prize.